Introduction To Sequence Assembly - The Fundamentals

The length of most genomes and chromosomes are longer than the longest sequence length produced by current technologies.

Sanger and Maxam and Gilbert’s methods can produce sequence lengths from 500 to 1,000 bases. Highly parallel high throughput platforms produce sequence fragments ranging from 20 bp to 500 bp. Long-read sequencing, such as PacBio and Oxford Nanopore can produce read lengths up to a few tens of kilobases.

So, by using long-read sequencing it is theoretically possible to sequence short viral, bacteriophage, and some prokaryotic genomes without a need for sequence assembly but fall way short of the lengths of large chromosomes and genomes. However, it is still desirable to add short-read sequencing to increase the accuracy as we see in the subsequent sections.

Therefore, the method of choice is to generate many overlapping sequence fragments that can be assembled together by pairing identical sequence stretches. We do this by first making many copies of a genome and then randomly breaking all the copies into short overlapping fragments. 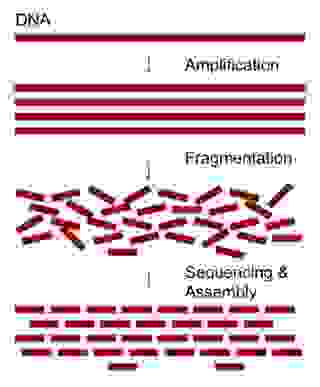 
Animation 1. Animation of copying and breaking DNA for genome assembly.

The sequencing coverage describes the number of times the target genome is sequenced. The original DNA is amplified, i.e., copied several times and randomly broken into many overlapping fragments (Figure 1). These fragments are then sequenced. The number of reads (sequenced fragments) multiplied by the average length of the reads gives us the total DNA length sequenced.

For example, the length of a haploid human genome is about three billion base pairs (3Gb) and if we sequence and we want to achieve 50 times coverage (50X), we need to sequence enough fragments to get in total 50 x 3Gb of sequence.

Note that C is the average coverage and works as expected only if the genome is broken into fragments as randomly as possible. Furthermore, we only sequence as many fragments that are required to achieve the desired coverage, not all of them. Therefore, the selection of which fragments we sequence must also be random.

The higher the average coverage is the lower the probability that some genomic regions lack coverage. A random sequencing results in a sequence coverage that follows the Poisson distribution; Thus, the coverage varies from one genomic region to another, also termed as the mapped read depth (Figure 2).

Figure 2. An example of an average 10X coverage along a contiguous sequence (contig). 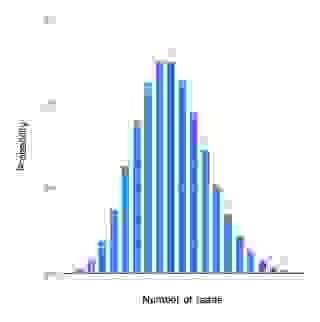 Figure 3. Read coverage according to Poisson with an average of 10. 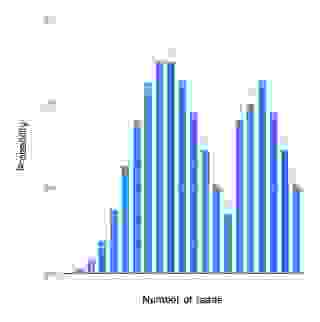 Figure 4. An example of non-Poisson read coverage. The mapped read depth can deviate from the ideal Poisson distribution for many different reasons.


Non-random selection of reads results in biased sequence coverage where some genomic regions may have extremely high coverage and some may lack coverage altogether. So, the randomness is important also because sequence assembly programs tend to incorrectly assemble highly similar or identical repeats into a single alignment, also resulting in high coverage.

In practice, the sequencing coverage will deviate from the ideal uniform distribution over the whole genome. Unfortunately, all sequencing technologies produce biases in varying degrees and types. Despite a high sequence coverage, some regions may not be covered at all resulting in unwanted gaps.

On the other hand, biased sequence coverage may mislead us to incorrectly conclude that a high coverage region is caused by erroneously assembled repeated regions or at least will make it difficult to assess the underlying cause. See below “What complicates genome assembly? Repeated regions.”

Illumina sequencing and other similar technologies may lose coverage in both high and low GC content sequences stretch. Besides, Illumina produces some errors that are DNA strand-specific. Long homopolymer stretches are an obstacle for terminator free chemistries, such as Ion Torrent and 454 methods. Specifically, they have difficulties in producing an accurate count of bases within homopolymer regions.

How to select proper coverage depends on the sequencing method, the purpose, and of course, the amount of money one can spend. However, further details on sequencing coverage is a topic for another tutorial.

It is important to evaluate the quality of genome assemblies. Learn more about it in the Tutorial: Genome assembly Quality Metrics.

To overcome the limitations of limited read lengths, we can sequence fragments from both ends. By selecting fragments of a specific size, longer than the read length, and sequencing both ends, we will know how far apart the two sequenced ends are (Figure 3). The knowledge of the distance between a pair of reads helps assembly programs to assemble repeated regions.

One may wonder why not produce all fragments as mate-pairs alternatively use long-read sequencing that can produce several kilobases of contiguous sequence? The reason is the cost. High-throughput short-read sequencing is still much cheaper than the alternatives and is used to provide overall coverage. Therefore, the majority of the sequence coverage is based on short-reads and only a relatively small portion of additional coverage by short- and long-insert paired-end sequencing.

A combination of short-insert paired-end and mate-pairs provide coverage to span across repeated regions and to resolve structural variants. An alternative is of course to use long-read sequencing but it is a matter of available funding since long-read sequencing is still relatively expensive in comparison. 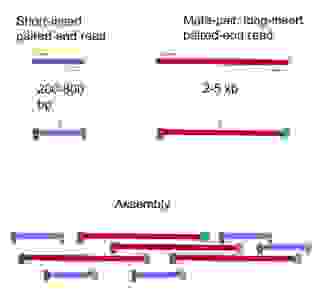 Repeats and duplicated regions are the main devils making the assembly task difficult. In general, assembly algorithms are able to handle repeats that are shorter than the average read length. Although, not all the time 100% correct. Depending on the specific algorithm and parameter settings a small portion of fragments containing short repeat may still end up in the wrong location. This can happen when only a few bases in a flanking region do not match the consensus sequence while the rest of the fragment matches more or less perfectly.

When the bases of a fragment do not match the rest of the alignment, we must consider a few different causes for this. 1. The differences are caused by sequencing errors, 2. The fragment is a repeat belonging to a different genomic location (Figure 5), or 3. The fragment is in a correct location but contains polymorphism among the homologous chromosomes (Figure 6).

If the base qualities are low, i.e., the probability of errors is above a set threshold, the software will label these as errors (1). However, in the case of the bases having a low error probability, then the fragment is likely to originate from a different genomic location (2) (Figure 5), or the differences are caused by polymorphism (3) (Figure 6).

Note though that this is theoretical and the reality is usually more complicated. Particularly when we encounter a mix of all three cases in the same location.

Figure 5. Example of differences likely due to erroneous alignment of repeated regions. The blue line marks the repeat boundary. The left side of the boundary consists of non-repeated sequences.

Figure 6. Example of differences in alignment caused by polymorphism.


Repeats that are longer than the length of the sequenced fragments are more problematic because only the flanking regions are unique and the reads are not long enough to cover entire repeats.

The repeated regions can be identical or nearly identical in varying degrees and they can be interspersed in the genome or appear in tandem, repeated one or more times. For example, the human genome contains 45% transposons, 5% percent of large duplications, and about 3% micro- and minisatellites that are shorter than 100 base pairs. Thus, about half of the human genome is made up of repetitive sequences.

Since accurate sequencing is an essential prerequisite to not only achieve correct assemblies but further analyses, such as detection of single-nucleotide polymorphism (SNP), and the assessment of structural variation. Therefore, several teams have developed error correction software that attempt to rectify sequencing errors prior to the assembly step. However, they are not able to correct all the errors. For example, many such algorithms rely on the sequencing errors being randomly distributed and thus fail specific biases that produce similar errors that are not random.

Also, the estimation of base quality values or the probability of a base being erroneously called, are valuable in tackling sequencing errors. All major sequencing platforms provide base-wise quality values. But, as is the case most of the time, nothing is 100% perfect. First, the estimates are not perfectly correct, and second, they consist of probabilities.

How assemblers handle quality values, depends on the specific parameter settings and the algorithm. After all, in each specific alignment case, the question is how do you handle a base that has an error probability of, for example, 10%, 5%, or 0.1%. In each case, the base may be correct or incorrect.

Phred quality scores are commonly used and defined as

We have a chance to correctly assemble identical repeats only if we have contiguous sequences that span over the entire repeated stretches including the flanking no-repeated parts. If we lack contiguous sequences spanning over the entire repeated regions, sequencing errors can confuse assemblers to resolve parts of de facto identical repeats into several separate contigs.

Repeated regions vary in degree of similarity. Nearly identical repeats are also cumbersome to assemble correctly. Due to only a few differences between repeat copies and the presence of sequencing errors, it is often difficult to make a distinction between a real difference and a sequencing error.

DNA is double-stranded and in the fragmentation process, we lose the information of which DNA strand each fragment originates. Given a good sequence coverage, it is possible to solve the orientation problem. The only drawback is that we have to convert all the sequences also into reverse complementary sequences, thereby doubling the number of sequences; Thus, adding computing time. 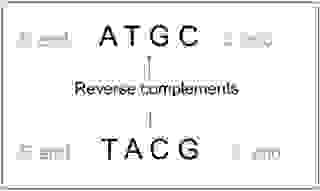 As described in the section Examples of sequence coverage biases (link), some genomic locations may have lower than expected coverage or lack coverage altogether. Theoretically, increasing the average coverage, i.e., sequencing more fragments, will decrease the chance that any region lacks coverage. Due to biases in the sampling process itself and platform-specific biases, the actual coverage will deviate from the theoretically calculated coverage.

In cases where we use bacterial cloning, for example, E. coli, the most likely source of contamination is the host sequences mixed with genomic sequences. However, mistakes happen and it is a good practice to always filter the sequences even when cloning is not used.